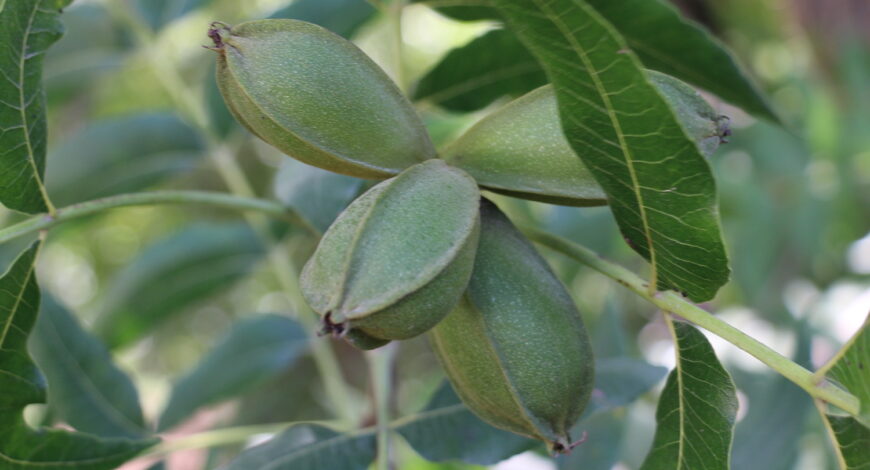 Pecans: True to Their Cultural Roots

Pecans are a very American nut—in fact, they are the most American nut because pecan trees are the only native nut tree of all of North America. It is believed by archeologists that the first pecan trees originated in present day South Texas and Northern Mexico, along creeks and rivers. Slowly, the natives of those lands began to spread the nut along the Mississippi and down into Mexico.

Pecans have been a valued food source for humans in the North American continent for about 8,000 years (!). That means that pecans are a long-lasting cornerstone of American culture and cuisine. The word Pecan comes from the Native American word pecane which literally means: “nut that requires a rock to crack open.” Native Americans used pecans as a cornerstone of their diet and valued them so much that pecans became a valued currency within certain tribes. It wasn’t long after Spain began to colonize the Americas that the new settlers began harvesting and planting pecan trees of their own. Native Americans shared their knowledge of harvesting pecans with early settlers and pioneers, who in turn began to incorporate pecans into their cultures and traditions. Even George Washington and Thomas Jefferson had pecans trees on their lands and loved to eat them in pies and as snacks.

By the late 1700’s, pecan trees were being grown all over the continent. By the early 1800’s, pecans were being exported all over the world—from France to India, even all the way to Australia. It turns out that a slave gardener on a Louisiana plantation, by the name of Antoine, was the first person to successfully graft pecan trees. In other words, before Antoine, growing pecan trees was not easy. Pecan farmers were planting pecan trees by the thousands and it was difficult to get a uniform variety of nuts. A pecan planer would plant, say, 100 seeds from their desired tree, but all of the trees that grew from those seeds varied greatly in size and quality. It wasn’t until Antoine, a skilled gardener, figured out how to successfully propagate individual pecan trees—creating individual trees that shared desirable qualities with the parent tree. Antoine’s technique allowed the pecan tree to be mass produced and become a successful commercial crop.

The story of how the pecan tree was turned into a valuable cash crop for North American planters is a story that defines the pecan as the nut of the people—harvested by the people for the people. The story continues the tradition of native folk giving their knowledge and skill for the sustenance of the whole population. Pecan farmers of today know that they are carrying on a valuable tradition in American culture, and by keeping the tradition alive, they are validating and paying homage to the native people and slaves that gave the world the gift of the pecan.

About Us6
Pecans3
Recipes17

Select the fields to be shown. Others will be hidden. Drag and drop to rearrange the order.
Compare
Wishlist 0
Open wishlist page Continue shopping